Many ungulate populations in the northern hemisphere have increased in recent decades both in terms of density and range occupation. In Europe, cervid populations have increased remarkably over the last four decades with a multiplied harvest yield for landowners and hunters. However, the current high population densities may severely impact ecosystems at different levels. They may change the composition and relative abundance of vegetation affecting both species composition and diversity, and alter other animal communities such as insects, birds and small mammals. The impacts of wild deer species can often conflict with human land-use objectives such as agriculture and forestry and the degree of conflict and damage often are increases with increasing population densities. At the same time, deer populations provide important economic resources through the production of game meat and in recreational hunting, which is a significant source of revenue in many rural areas.

Habitat use is the way an animal manipulates the physical and biological resources in a habitat. These resources include food, cover, water, and special factors needed by a species for survival and reproductive success. Adequate quantities of usable resources are necessary to sustain animal populations. Therefore, biologists often identify resources used by animals and document the availability of those resources. The need for such documentation is especially critical in efforts to manage exploited populations. Important elements (e.g., food, cover) of the habitat of an animal are often provided by vegetation. Changes in vegetation can, therefore, alter habitat conditions, and therefore understanding how the structure and composition of vegetation influence the quantity and quality of habitat features is central to understanding the distribution and abundance of animals.

The potential for LiDAR to measure forest structure has long been recognized. Airborne laser scanning has been successfully incorporated within National Forest Inventories across the world. A number of forest structure attributes have been derived from ALS, including canopy height, biomass, canopy cover, canopy vertical structure and quantification of coarse woody debris. TLS has been shown to be capable of determining high-quality tree attributes that are important but are not directly measurable in conventional forest inventories, such as stem volume and biomass components (total, stem and branches), with accuracy levels that are similar to the best national allometric models. It is worth to note that TLS is also a popular tool in forest ecology. The use of TLS has been intensively studied, e.g., for the estimation of leaf area index, gap fraction, canopy radiation, crown structure, and leaf area distribution.

The overall objective of this study is to study the influence of forest structure on habitat use by red deer using multi-source remote sensing. Specifically, we aim to achieve the following sub-objectives:

1.       Forage abundance for red deer will be mapped at landscape scale by combing airborne and terrestrial data, and selectivity of forage by red deer across vegetation and winter seasons will be analyzed.

2.       Forage quality at different growth stages for red deer will be estimated using satellite imagery and ancillary data at a landscape scale to explore whether red deer will migrate along the altitudinal gradient in pursuit of forage with high quality.

3.       Habitat use response of red deer to temporal and spatial forest changes will be investigated. 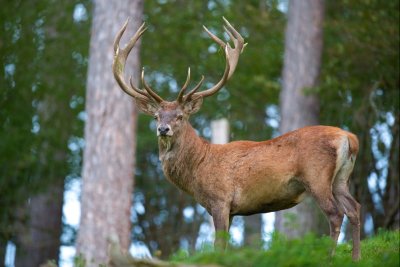