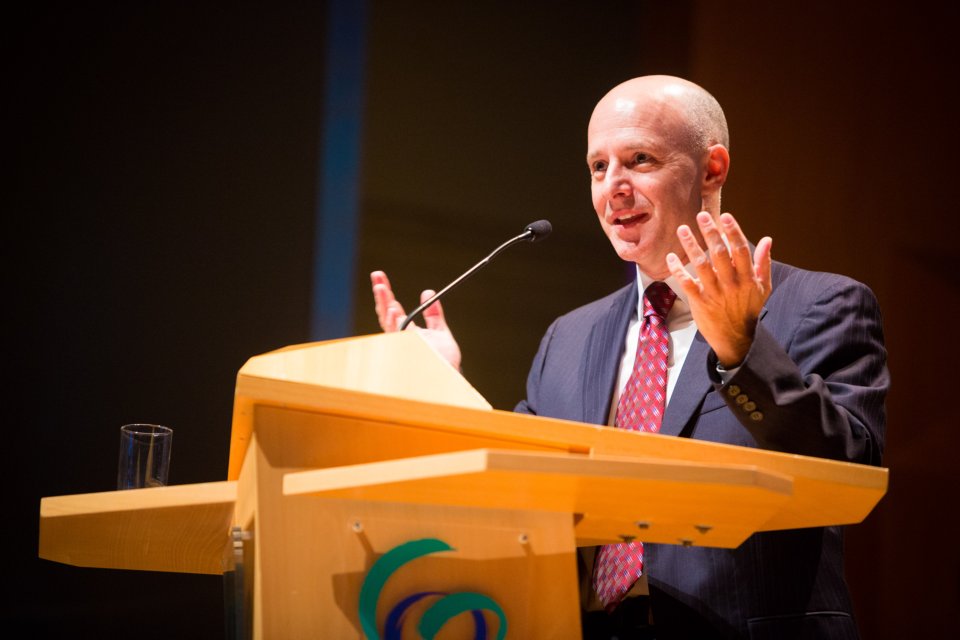 Daniel Irwin (year of birth 1968) is the founder and Director of SERVIR—a joint NASA and US Agency for International Development (USAID) program, with activities in over 40 countries throughout Central America, Eastern and Southern Africa, West Africa, the Hindu Kush Himalaya, and lower Mekong regions. Through the SERVIR program, NASA and USAID partner with, and set up “hubs” at regional science-based organizations around the world to provide critical information and support services to help national, regional and local governments, forecasters, climatologists and other researchers track environmental changes, evaluate ecological threats and rapidly respond to and assess damage from natural disasters.

Drawing upon twenty-five years of experience, Irwin discussed how he came up with SERVIR through a series of unique encounters—and how big ideas can come from a series of small life defining moments.   One of these, which Irwin shared with his audience, dates from the nineties. “I was doing field work by walking through the jungles of Guatemala to map a new national park using a GPS and compass. After a difficult year of doing this, I met a NASA archeologist who was using satellite imagery to find unrecorded Maya archeological sites from space. When I saw the imagery, I realized there was a much better way of mapping the jungles, and that the same data would be crucial for environmental management. It changed my life forever.”

When most people think of NASA, they think of rockets to the moon or rovers on Mars. However, as early as 1958, when the agency was founded, Irwin nuanced, NASA has been dedicated to monitoring the Earth from the unique vantage point of space and using this information to benefit our planet. In 1999, Irwin joined NASA to support the space archeology program and use the data to trace hidden cities of the ancient Maya. What he saw, was the impact of a combination of urbanization and deforestation, millennia’s ago. The Maya were brilliant astronomers and engineers. However, to build their cities they cut down all their forests, which is believed to have caused a change in regional climate, leading to major drought. As a result, around 800 A.D., this brilliant civilization suffered a major collapse. Irwin wonders that if the ancient Maya had the ability to see what was happening to their environment from the unique vantage point of space, perhaps they would have had a different future. These are important lessons for society today.

Irwin believes that solving the big problems facing our planet today, such as climate change, require an ‘orbital perspective’ where we can use the vantage point of space to trace patterns and trends to understand our Earth as a system. This is why the NASA SERVIR program is ‘sky high’ by sharing satellite information with countries around the world, which can then take action based on the data.

Irwin stated that visiting ITC and giving the Schermerhorn Lecture was a huge honor and dream-come-true. He said, “Throughout the geospatial and mapping community around the world, ITC is a household name. ITC has a strong academic reputation, and most importantly, people are aware of the phenomenal professionals that have come out of ITC, and who then go back to their countries to do great things.” In fact, several of the people who work at SERVIR hubs in Kenya, Nepal, Thailand, and Niger are graduates of ITC.