Guatemalan society is highly vulnerable to climate change. In the last decade, climate change has affected the main productive sectors of the country, compromising food production, causing economic losses, and having a substantial social and environmental impact on rural communities. The region of Quetzaltenango is important in the production of vegetables for local consumption (food security) and for export to neighbouring countries (foundational to the region’s economy).

Food production is not only important because it contributes to the nation’s food security but also because it is a major source of employment and as such it adds to the region’s development. An important characteristic of this region is that farmers are predominantly women. According to the estimations of the NGO ‘Asociación de Cooperación para el Desarrollo Rural de Occidente’ (CDRO by Spanish acronym), female farmers represent about 60% of the farmers. At the same time, men work in other economic sectors. In recent years, extreme weather events have caused severe damage to crops, thus threatening food security and affecting the region’s economy considerably.

The Departamento de Ciencia y Tecnología (CYTCUNOC) of the Centro Universitario de Occidente (CUNOC), Universidad de San Carlos de Guatemala (USAC) coordinates an ‘early warning committee’ composed of the University, the forestry and environmental offices of three municipalities (i.e., Quezaltenango, Olintepeque and Concepción Chiquirichapa), two governmental agencies (i.e., INSIVUMEH and MAGA), and two NGOs (i.e., TNC, and CDRO). The committee manages a network of weather stations in the Quetzaltenango valley, which was established aiming to support food production and disaster reduction. A pilot project in the food production domain was carried out to provide 600 farmers with raw observations using SMS messages. The technology works but since most of the farmers are illiterate, there was a need to find better ways to provide actionable information to farmers, rather than just observations, and to train them on how to use this information.

Preventive maintenance of a weather station located on the CUNOC campus

The early warning committee was aware that it was critical to make better use of the weather stations, by transforming raw weather data into actionable information products such as maps, graphs, and statistics, which can also hint at planting and harvesting schedules. However, they lacked technical skills and scientific knowledge to go from the raw data to the desired products.

Capacity development through a Tailor-Made Training

The GIP department of the Faculty ITC has supported capacity development in the CYTCUNOC department since 2004. For this reason, in 2021, CYTCUNOC requested the GIP department to support capacity development for the ‘early warning committee,’ which led to the proposal of the Tailor-Made Training “Actionable weather information for a more sustainable and climate change-proof agriculture in Quetzaltenango valley, Guatemala” and which was sponsored by NUFFIC's Orange Knowledge Programme (OKP). The proposed training aimed to develop the capacities of the early warning committee to develop products to support sustainable development and improve food production in the region of Quetzaltenango. The committee members needed to develop skills to produce and disseminate actionable weather information to be able to inform illiterate farmers by means of intuitive information products describing weather conditions and risks of extreme weather events. Additionally, the committee needed help in training farmers so that they can take advantage of such information products.

The TMT started with a Training Needs Assessment exercise to ensure that the training modules would align with the technical and scientific gap. Based on the assessment five modules were designed: (1) introduction to spatial databases, (2) deriving actionable weather information, (3) designing and disseminating of visual information products for an illiterate audience, (4) making informed decisions on agricultural practices, and (5) training the trainers. The training reached 35 participants from nine institutions and set the basis to support food production through the facilitation of actionable weather information in the Quetzaltenango valley. 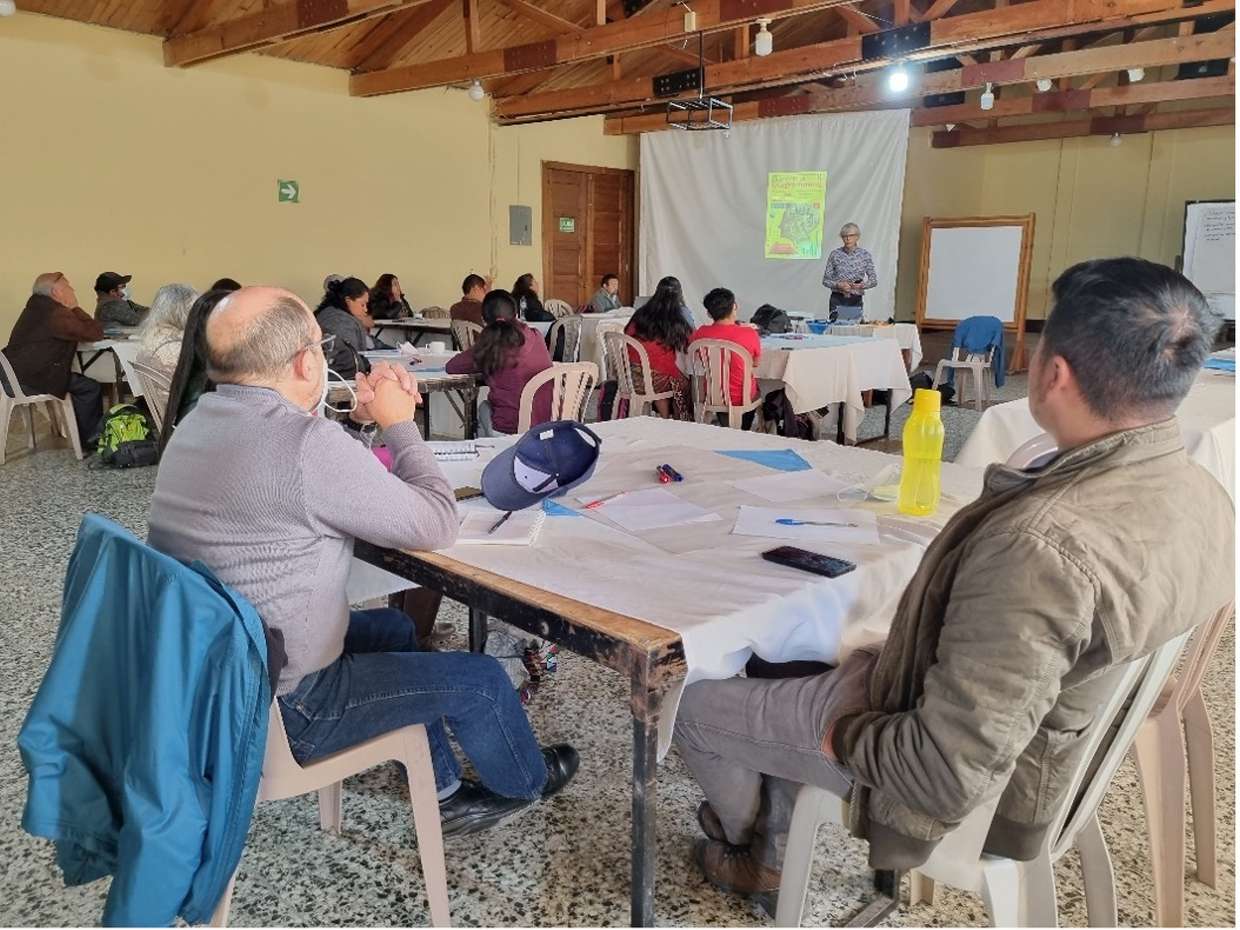 Currently, the CYTCUNOC department is defining the short-, medium-, and long-term plans to maintain the weather stations network functional and extend it by adding new stations, establishing an automatic processing workflow to go from raw data to actionable weather information products and providing those products and training to food producer in the region. Additionally, there is active communication with the GIP department to plan further training activities.

A comic, worth much more than 1000 words

Throughout the implementation of the TMT, the need to produce materials to explain in a simple but engaging way the importance of weather information emerged among the coordination team. Initially, discussions were around the production of infographics, and even some initial drafts were produced. However, none of the participants in this effort was satisfied, and further discussions led to the conclusion that a better approach to address this need was to produce a comic.

At present, a series of five comics entitled “Sonia, Don Pedro y el clima” are being produced, and are expected to serve to communicate the importance of combining traditional food production practices with informed decision-making based on weather information. 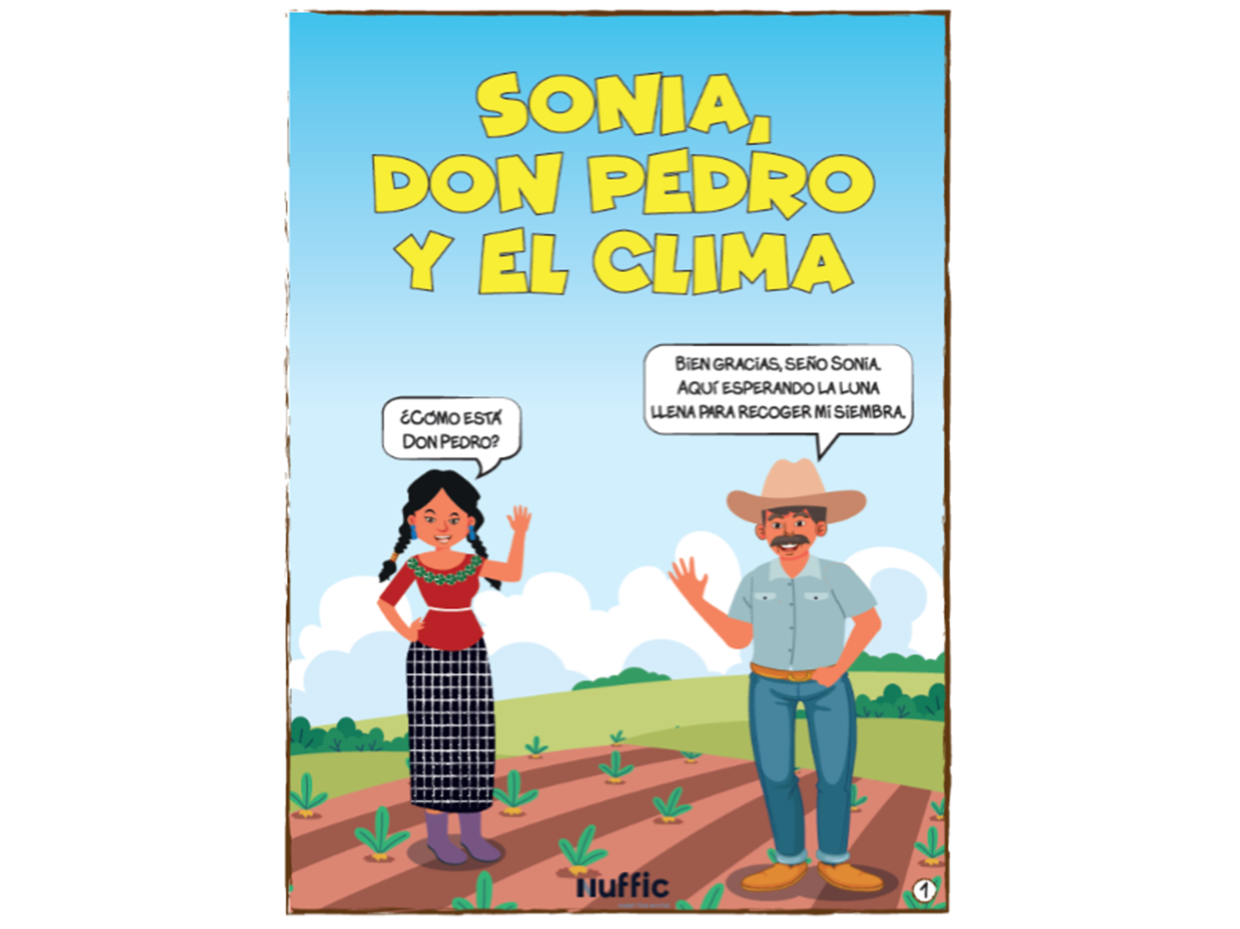