In the Netherlands and other European countries, you just have to open an app on your telephone to get a fairly accurate prediction of the rainfall in the coming few hours. This is possible thanks to radar that can detect rainfall with a very high resolution. In many areas of the world, such as rural Africa, no such weather technologies are available. This makes rainfall predictions difficult.

Satellites form one solution to this problem. However, the resolution of satellite data – areas as big as the whole of the city of Enschede – makes the scale of the rainfall prediction useless for the average African farmer whose plot covers only a few hundred square metres. In his research, Kumah used phone signals to detect rainfall. He combined the phone signals with satellite data to train a machine learning algorithm that can monitor and predict rainfall where traditional but expensive radar data is unavailable. 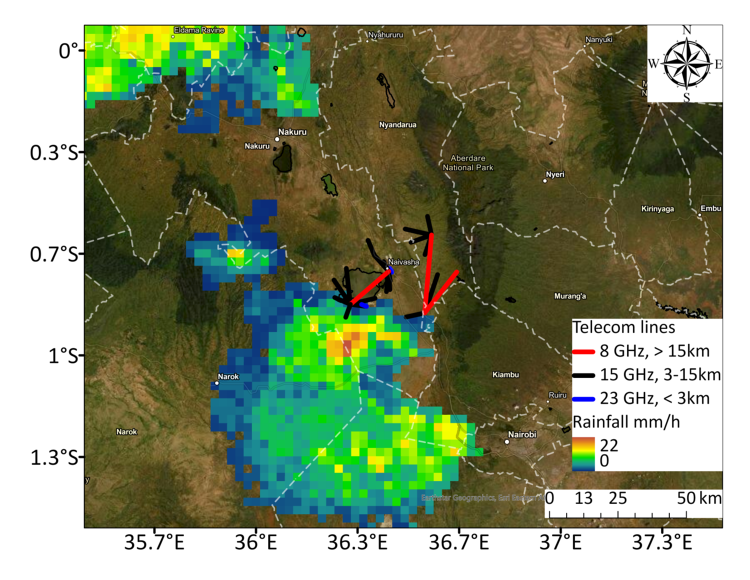 Figure 1: Rainfall intensities in mm per hour detected and estimated using signals from telecom lines (coloured lines in the image at different frequencies and lengths) and satellite data for an area in the Kenyan Rift Valley

Collecting accurate data this way proved to be difficult. Kumah: “Antennas are more abundant, but not equally distributed over the land. An increased distance between antennas results in a higher level of uncertainty. Also, most mobile network operators deliver data in 15-minute intervals. Any rainfall shorter than that period may be missed.” Even with these challenges, the data was accurate enough to train his algorithm. Kumah continues to train the algorithm with more extreme rainfall and new conditions to make it more accurate.

In the future, Kumah hopes to develop products that can be easily accessed on a smartphone. “If telecommunications companies and meteorological institutes collaborate then this goal isn’t even that far away. The telecom companies could provide the phone signal data and be at the forefront of delivering the warning to farmers,” Kumah says.

Kingsley Kumah was a PhD student at the Department of Water Resources (WRS; Faculty of ITC), supervised by Dr Ben Maathuis, Dr Joost Hoedjes and Prof Z. Su. His public PhD defence about this project is on 26 October 2022. His thesis, titled Near-Real-Time Rainfall Detection and Estimation from Commercial Microwave Links and Meteosat Second Generation Data, is available for download. Kingsley’s research is also thoroughly reviewed by experts in environmental and atmospheric sciences and published in leading scientific journals such as Elsevier, Remote Sensing, Sensors and Water