The INACHUS project, funded by the European Commission’s Seventh Framework Programme, develops solutions that support the work of USaR and rescue teams. The work of saving lives during a disaster occurs in harsh conditions in a race against the clock. For four years, INACHUS has developed innovative tools to aid in victim detection and localisation, wide-area situational awareness, structural failure prediction, secure and reliable communication, as well as coordination of large-scale response missions.

Using a scenario involving a major earthquake with international help requested, INACHUS partners demonstrated how the various solutions developed in the project could assist in all phases of a USaR response, through all levels of coordination. Roquebillière, France, offered a realistic environment to demonstrate several of the INACHUS tools over two locations. First, a Base of Operations tent where the Common Operational Picture (COP) and the Emergency Support System (ESS) coordination tools were located, and second, a worksite three kilometres away, where victims were hidden in rubble designed to represent an inaccessible void.

INACHUS, now in its fourth and final year, has continuously sought feedback from end users to ensure that the developed tools are as useful and relevant as possible. The final pilot was a chance to demonstrate the whole INACHUS solution in close to real operational conditions. USaR rescuers, Red Cross and coal mine rescuers, and practitioners from seven European countries had a chance to use the tools developed by INACHUS partners.

Before the arrival of the USaR teams on site, during the preparation phase of the rescue operation, the Mapping Tool allows for rapid damage assessment at a city level. For an area that is modelled, inserting the location, depth and strength of an earthquake into the tool produces a color-coded, map-based overview of probable damage, indicating estimates of the degree of damage to each building and the number of people affected. Building type and time of day are also considered. 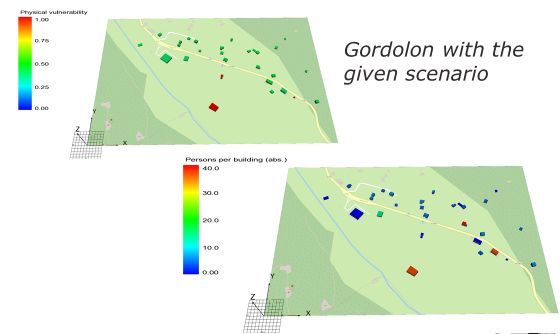 Physical vulnerability and person per building in the sector of Gordolon (Roquebillière).

Wide area surveillance is performed thanks to 3D laser scanners embedded on fixed wing UAVs that cover large areas. 3D point clouds are transmitted to the USaR ground-station and can be displayed on the Common Operational Picture (COP) to give a global view of the area. For smaller areas, such as a city block, 3D models of buildings, rubble and cavities can be retrieved from high resolution 3D data acquired with smaller laser imaging systems embedded on rotary wing UAVs by automatic or piloted navigation. 3D point cloud, fused visible and infrared videos are real-time transferred and displayed on the COP and USaR devices.

Sector assessment is carried out by a light-weight UAV carrying a camera that automatically and in near-real-time detects collapsed and partially collapsed buildings within a given sector. The tool is inexpensive, light and easy to use. The flight path can be planned easily at the site, or even en route to the area. The 3D modelling helps greatly in offering a situational overview for prioritisation and damage assessment. For example, the location of rubble, debris, cracks, building inclination is automated and easy to visualise. 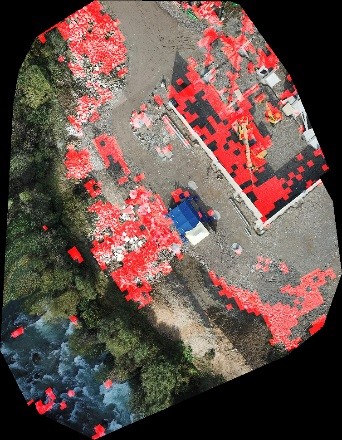 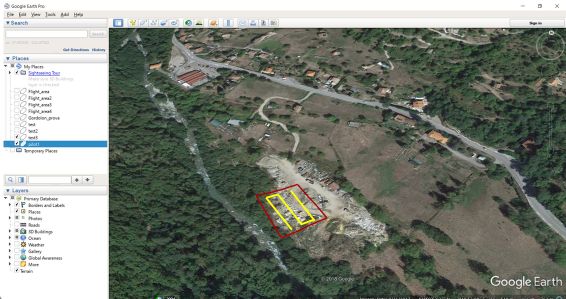 The Collapse Simulation Tool can be used to create highly accurate 3D models of buildings, whose collapse can then be simulated with high precision by entering the type, location and extent of an explosion or earthquake. In USaR conditions, such a model of a collapsed building can help to locate voids where victims may be able to survive. Furthermore, it can be used to determine a rescue route. Importantly, the tool can also predict further collapse due to aftershocks or the removal of rubble or support columns for example during rescue operations. The tool was demonstrated at the INACHUS pilot with a use case adapted to the city center of Roquebillière. 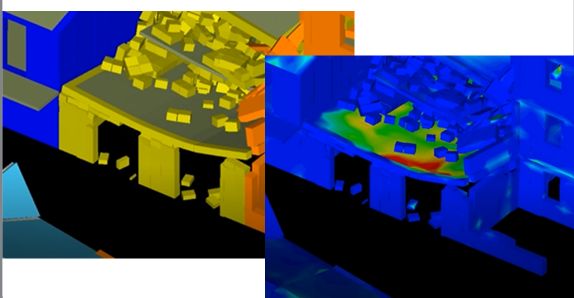 Application case: safety of structural elements and debris stability in the city of Roquebillière

Following the scenario of a typical USAR operation after an earthquake, participants were asked to assume roles at all different levels of coordination when using the INACHUS COP and Mobile COP (software tool allowing for visualization of response progress including crucial response information; sectorization, location of teams, location and status of worksites) and ESS portal and Mobile ESS (to digitally complete the INSARAG forms required during large-scale response missions, and to share data in real time).

The Multi-Information Fusion Engine (MIFE) was responsible for collecting the data coming from the worksite of Gordolon, which included data from the Victim localisation tools (electronic nose, robot radar), the seismic sensors and the surface radar, and generating alerts, displayed on the COP, alerting the commander of the possible location of victims, and/or the presence of toxic and combustible gases and their level of danger (color coded). The data was processed through and Complex Event Processor, which determined the Alert Type (i.e. Human, Toxic, Combustible), the Accuracy percentage of a human presence, and the Alert Level, as well as the Error Radius, where applicable. 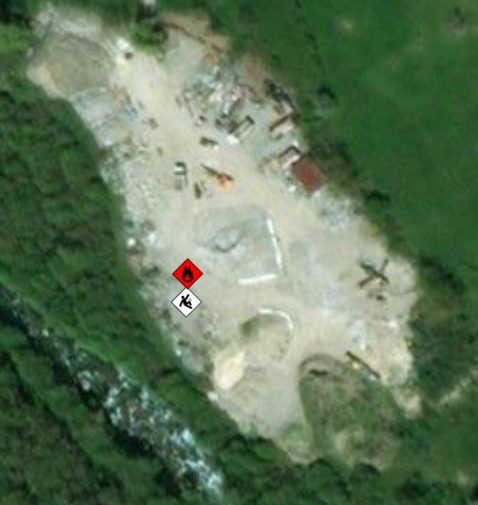 A COP screenshot depicting the worksite and two alert signals generated by the MIFE: a dangerous combustible gas, and a human victim

INACHUS victim localisation tools were used at the worksite in Gordolon to locate hidden volunteers in a complex rubble pile. Several tools were used, following a realistic scenario.

The INACHUS Robot is a mobile platform carrying sensors and radars into the rubble to pinpoint signs of life and victims’ locations. It uses a radar to indicate the direction of slight motions under the rubble; a gas senor – the electronic nose – to detect various gases associated with living humans, and a thermal camera to detect body heat. It is also equipped with a camera, microphone, speaker, and low-heat lights integrated in the head of the robot. During the pilot, the end users operated the robot and located two victims using sensors. The two-way communication system allowed the end users to communicate with the victim. The robot was found easy to operate and the interface easy to use and interpret, including the sensors’ output and camera views.

The purpose of the INACHUS Seismic System is to detect and locate vibrations produced by victims inside the rubble. The key to success is that the system continuously learns what the environment sounds like and then detects signals that differ from the background noise. The results are visualized as a ‘heat map’ to give a better understanding of where signals are coming from.

During the seismic sensor demonstration, guests saw the signal location from a victim on a heat map

During the pilot, it was shown that the detection algorithms work even with a combination of (cabled) vibration sensors from different manufacturers, and that making a physical interface to connect them is straightforward. The end users were very impressed by the efficiency of the system and its user interface and agreed that it is a significant step forward compared to tools currently in operational use.

INACHUS also developed a stand-alone radar used to detect motion through rubble. A feature of the INACHUS surface radar is that it can estimate the distance and direction to the movement, to help pinpoint its location faster. Detecting movement through rubble is generally very challenging and the performance of radar systems varies significantly depending on the materials and structure of the rubble pile. 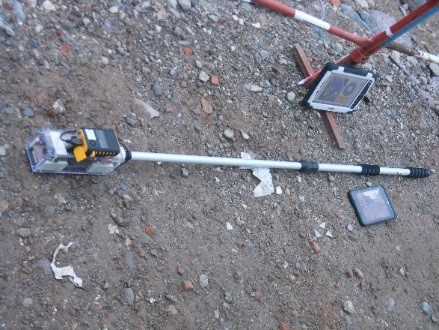 INACHUS developed a reliable, autonomous and secure communication network, essential to USaR operations where pre-existing communication networks are often either overloaded or simply not functioning. The INACHUS network was used to share, in real time, digitalized INSARAG forms (completed in the ESS) and other data from the sensors located in the field, as well as transmitting HD video from the drone flights in the worksite in real time. Furthermore, it allowed for communication between the Base of Operations (including the COP) and the worksite, which end users state is a common problem in real missions. The long-range communication was established using two pairs of long range wi-fi devices in order to establish two point-to point links and mobile-gateways to provide access to the local network to the INACHUS tools (robot, seismic sensors, radars, tablets).

The Communication network modules installed on a high point for line-of-sight (left), on the worksite (second from left). The mobile gateway (second from right) and the map of the ‘communication bubble’s’ coverage (right) deployed during the pilot.

Participants were very interested in the development of INACHUS tools, which they anticipate adding significant value to their current operations.

INACHUS incorporated four pilot demonstrations as the project progresses, each increasing in complexity. The first field test, held in Ågesta, Sweden in June 2016, focused on victim localisation tools. The second, held in France in May 2017, concentrated on wide-area assessment tools and collapse modelling tools. The third field test in Weeze, Germany was the first demonstration of the integrated INACHUS tools. The project’s final field test, held along the French and Italian border in November 2018, demonstrated the fully integrated INACHUS system.

Throughout the project, end user input was sought and incorporated into the tools. End user requirements were assessed at multiple key moments, and the project partners worked to ensure that their developments were well-received and useful to the USaR audience. The positive evaluation results for the final pilot demonstration confirmed the success of this end-user driven approach.

For more information on the INACHUS project, visit the project's website: https://www.inachus.eu/.