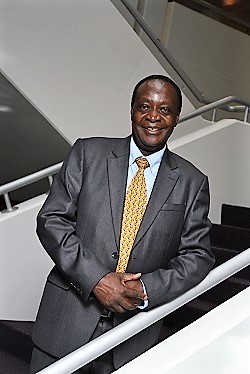 We are very delighted to learn that ITC alumnus Dr. Wilber Ottichilo won the race for Governor of Vihiga County. On behalf of the ITC community we take this opportunity to congratulate Wilbur Ottichilo on this well-deserved and overlong success.

Having obtained his bachelor’s degree in Biology, the 29-year-old Wilber Ottichilo arrived at ITC for the first time in 1981 to participate in a series of courses. “It really opened my eyes. I came as a village boy and left as a global citizen. It was my first time in Europe; I had never seen snow; I mixed with people from all over the world. Until then, I had never met any American or Chinese people. When we talked, I noticed we all had similar stories. They faced the same challenges and we all learned from one another’s experiences. Problems that seemed unsolvable suddenly became challenges that we were able to deal with.” In 1997, Ottichilo returned to ITC, obtaining a PhD in Use of Geo-information in Natural Resources and Environmental Assessment in 2000.

Ottichilo’s first real job was in 1974, when he became a physics teacher at a secondary school in Maseno. He worked as a researcher and manager in various ministries, and accepted a job as director general of the Regional Centre for Mapping of Resources for development (RCMRD) in 2000.