Home ITCAlumniNews from AlumniSiti Nurbaya: Pioneer in Her New Environment

As the first woman to hold the position of secretary-general of the Regional Representatives Council, Siti Nurbaya Bakar is a rare player in Indonesian politics, setting an example for women across the country.

Despite her political career peaking at a level below that of female world figures such as the Argentinian president Evita Peron, Britain’s former prime minister Margaret Thatcher or the late former Indian prime minister Indira Gandhi, she is proud of being an Indonesian woman and of what she has achieved throughout her three-decade career as a civil servant. She is also proud that Indonesia affords women, including former president Megawati Soekarnoputri, equal opportunity to play a role in politics − more so than even the male-dominated political landscape of the US. 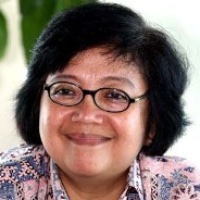 Siti (54) began her career in 1979 as an agricultural campaign specialist in the Lampung provincial government. There she developed her passion for bureaucracy through the unique experience of being the first woman in her new work environment. Some might say that Siti’s appointment as secretary-general of the Council by President Susilo Bambang Yudhoyono in 2004 was purely incidental and opportunistic. But history shows that she had experience in positions of leadership, with Megawati entrusting her with the number two position at the Home Ministry from 2001 to 2004.

“I was the first holder of a master’s degree among civil servants in 1988 and the first holder of a PhD among bureaucrats in 1998. After that, more and more civil servants received scholarships to undergo postgraduate and doctorate programmes at home and abroad,” said Siti, who earned her master’s at ITC in the Netherlands and her Ph.D. at the Bogor Institute of Agriculture.

Siti enjoys the challenges that have been thrown at her throughout her steadily advancing career, seeing them as chances to be more creative and innovative in serving the public and helping to improve people’s welfare.

“I’ve learned that life is a continuous challenge of innovation and the curriculum of life is whether the targets are reached or not. To be the first in something is most definitely memorable,” she said. According to Siti, her success stems from her ability and willingness take risks, while not being afraid to make mistakes in pursuing these “innovations”.

She also said that she was nominated for the post of home minister in 2000 and 2004, but turned it down in favor of remaining part of the country’s bureaucracy. “Just last November, two ministers offered me a position as special assistant, but I was not interested in the offer because the Council still needs me to build the capacity of the new legislative institution,” she explained, adding that with the unpredictable political climate it was a good time to work in the Cabinet.

Since becoming secretary-general, Siti has pioneered the hiring of fresh university graduates (instead of importing old staff from ministries and state agencies) to help polish the Council’s image and improve its productivity. “Now we are moving to build Council branch offices in all 33 provinces, a project that needs be completed by next year. So far, everything has progressed smoothly and transparently and no complaints have emerged,” she said.

During her tenure at the Home Ministry in 2002, Siti came up with the idea of introducing a minimum quota of 30% in regard to women’s positions in political parties and legislative elections. “I got the idea from Argentina’s political laws, the outcome of the long fight by the Peronist party. As a result, we’re getting more and more women in parliament. Although women and children do not yet play a key role in the law-making process, lawmakers should bear in mind that women are the most vulnerable to discrimination under these laws,” she said.

She is also deeply concerned over the disappearance of government-sponsored, grassroots social movements, such as the integrated service posts (Posyandu) and the dissolution of family-planning centers. This, she says, has contributed to the high infant and maternal mortality rates. “The poverty that afflicts 39 million people must also be quickly alleviated to control the rapid population growth and the high infant and maternal mortality rates.”

She acknowledged that political experience has made her more mature in executing her tasks and has increased her responsibility in the bureaucracy. Since her employment as a civil servant in Lampung, she has played an active role in the Golkar Party-affiliated Indonesian Younger Generation for Reform (AMPI) and even chaired the mass organization in 1993. "Bureaucracy is a training ground for would-be politicians. A bureaucrat must be able to perform administrative functions, prepare necessary policies, articulate the people’s aspirations and maintain political stability.”

When asked what motivated her to work hard in developing her career, Siti said she was obsessed by the challenge to prove that the harassing adage she had heard during her study in the Netherlands was absolutely wrong. “It said that, whatever women do, they must do it twice as well as men to be thought half as good. This has now been proved wrong by many Indonesian women,” she said, citing the fact that during the 30 years she had worked in the bureaucracy she had never taken any leave other than maternity leave to give birth to her two children.

Siti has criticised the ongoing reform in the country’s bureaucracy, which she says has not yet produced progressive bureaucrats. “The reform should focus not only on revamping the system but also on internalizing values to change bureaucracy’s mindset. The bureaucracy is the backbone of the government and national development and therefore it needs creative and innovative officials and staff to improve the public service.” According to Siti, civil servants must be able to internalize the noble values of public life, leaving selfishness behind, and display integrity, objectivity, accountability, openness, honesty, and leadership in their service to the public.