The Young Academy will soon be welcoming ten new members. They are researchers who work in a variety of disciplines, have been selected for their scientific achievements, and received their doctorates less than ten years ago. The ten new members will be inducted into The Young Academy on 22 March 2022. During their five-year membership, they will champion projects focusing on science policy, interdisciplinarity, science and society, and internationalisation. Dr Caroline Gevaert, assistant professor at the Department of Earth Observation Science within the ITC faculty of the University of Twente, is one of the new members.

Better data supports better decision-making on development issues and this is where Caroline Gevaert’s research comes in. Earth observation and artificial intelligence give us a better understanding of how the Earth’s surface is changing. For example, algorithms that map the growth of slums can help to improve conditions there. 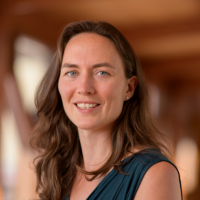 “I am very honored with the position and the trust and support I received from the university and LVNH in preparing the nomination. I find it very exciting to think about how we do research in the Netherlands and especially to get to know and work with other young researchers from different backgrounds and disciplines.”
Dr Caroline Gevaert

In her current research, Gevaert focuses on the use of drones and earth observation in developing countries, examining both the technical and the ethical issues associated with the responsible use of these technologies. She also works part time as a consultant for the World Bank. As a member of The Young Academy, she will promote collaboration with researchers in developing countries, inclusion, and alternative career paths for young researchers.

Besides Gevaert, here are the other new members:

About the Young Academy

The Young Academy is an adynamic and innovative group of scientists and scholars with outspoken views about science and scholarship and the related policy. The Young Academy organises inspiring activities for various target groups focusing on interdisciplinarity, science policy, and the interface between science and society. The Young Academy has fifty members. All received their doctorates less than ten years before their appointment to the Academy.  They represent a broad spectrum of scientific and scholarly disciplines and work at Dutch universities and a wide range of research institutes. Their membership lasts five years, with ten members leaving and joining each year. The Royal Netherlands Academy of Arts and sciences set up the Young Academy in 2005.

Source: The Royal Netherlands Academy of Arts and Sciences (KNAW)