Wetlands cover roughly 7% of the African continent (Junk et al. 2012). They provide a range of benefits to humankind on different scales, and local populations are often directly dependent on them (Nabahungu and Visser 2011; Mitsch and Gosselink 2000; Turyahabwe et al. 2013). Among their various ecosystem services are the purification and storage of water, the buffering of discharge peaks and therefore mitigation of floods, the provision of medicinal plants, the provision of food, carbon sequestration, and their contribution to biodiversity (Barbier 2011; Junk et al. 2012).

For their high agricultural potential, wetlands are increasingly becoming an integral part of agricultural development strategies throughout the African continent. Against the backdrop of climate change and increasing nutrient depletion and erosion of traditionally farmed soils (MEA, 2005; IPCC, 2014), wetland landscapes have been described as a viable option for future food production in sub-Saharan Africa in order to counteract dependency on global food markets and reduce hunger and poverty (Dixon and Wood 2003; Rebelo et al. 2009; Rodenburg et al. 2014). On the other hand, it is widely recognized that the inappropriate use of wetlands has already led to the degradation of many and to the rapid dwindling of total wetland area, with inland wetlands being most affected (Schuyt 2005, MEA 2005, Junk et al. 2012, Davidson 2014, IPCC 2014). Consequences of wetland degradation are habitat fragmentation and biodiversity loss, but also the decline of agricultural productivity (Leemhuis et al. 2017; Gordon, Finlayson, and Falkenmark 2010). It is no longer possible to think about agriculture without accounting for the ecosystem. However, the same holds true vice versa considering that Africa has the lowest self-sufficiency rate in cereals and will increasingly suffer from food price volatility and food insecurity without a high level of agricultural intensification and expansion of cropland area (van Ittersum et al. 2016).

Schuyt (2005) describes information failure as an underlying cause of the unsustainable use of wetlands. In fact, the knowledge base of African wetlands in particular is still insufficient to understand and quantify state and changes, and eventually make informed decisions towards their sustainable use (Davidson 2014; Schuyt 2005; Amler, Schmidt, and Menz 2015; Leemhuis et al. 2016). Remote sensing technology provides consistent data on different temporal and spatial scales, repeatedly, and at a relatively low cost, with a confirmed potential for wetland mapping, inventorying and monitoring (MacKay et al. 2009; Amler, Schmidt, and Menz 2015; Jones et al. 2009). Considerable efforts are being made towards the implementation of a global wetland observing system in support of the Ramsar Convention on Wetlands, to date mostly restricted to single case studies (Jones et al. 2009; Merken et al. 2015).

The overall goal of this thesis is therefore to explore the potential of Earth Observation technology to close the persisting information gap in order to support sustainable wetland use for food production in Rwandan wetlands, coherently and nationwide. The building blocks towards this goal are (1) a framework for the delineation and characterization of tropical inland wetlands at a national scale, (2) the detection of wetland use trajectories over time, (3) an adapted wetland ecosystem integrity assessment which incorporates remotely sensed imagery and (4) the evaluation of selected wetlands’ trajectories regarding the sustainability of their use. 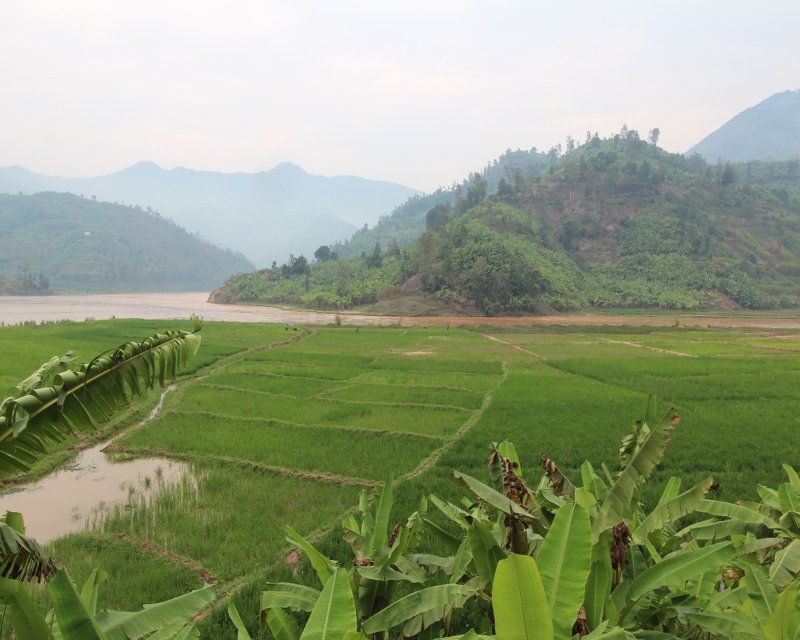 Wetland in the northwest of Rwanda used for lowland rice agriculture and banana cultivation.