In November 2021, UNESCO adopted the Recommendation on Open Science, which addresses all scientific disciplines, including basic and applied sciences, natural and social sciences, and the humanities. One of its goals is to create and promote a shared understanding of what Open Science means. The recommendation defines Open Science as an umbrella term covering four key pillars:

These four pillars comprise several practices, which aim to make "scientific knowledge openly available, accessible and reusable for everyone, to increase scientific collaborations and sharing of information for the benefits of science and society". The following sections provide an overview of these practices as described in the recommendation. Some sections contain additions not mentioned in the recommendation to clarify a particular aspect or refer to activities related to Open Science at ITC. These additions are labelled as such.

Scientific knowledge is open if everyone has open access to scientific publications, research data, metadata, open educational resources, software and source code, and hardware. In open scientific knowledge, access to these materials is granted immediately or as soon as possible under an open license, allowing everyone to access, reuse, modify, and re-distribute them. To also consider legitimate reasons to restrict access to scientific knowledge (e.g., to protect human rights, national security, confidentiality, privacy and respect for humans, legal process and public order, intellectual property rights, personal information, sacred and secret indigenous knowledge, and threatened species), the guideline is "as open as possible, as closed as necessary". Any form of restriction needs to be justified. 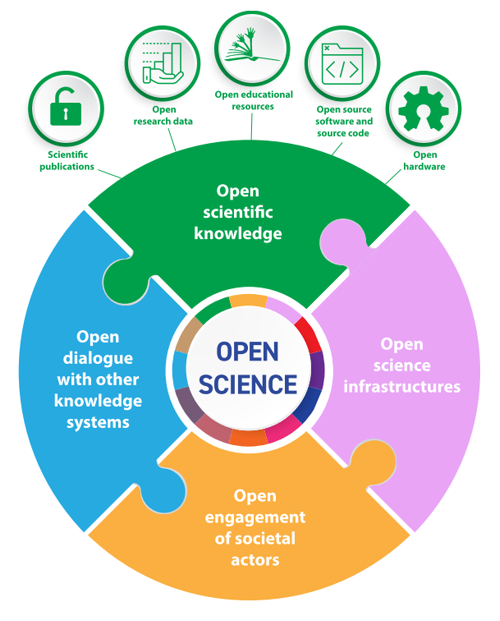 Scientific publications (incl. peer-reviewed journal articles and books, research reports, and conference papers) are openly accessible if they are released immediately after publication in a way that enables unrestricted distribution, interoperability, and long-term digital preservation. This can be done through a publisher or an open repository maintained by an academic institution, scholarly society, government agency, or other not-for-profit organisations. Paywalled publications are not in line with the Open Science principles. Addition: An often-mentioned concern is that many researchers cannot pay the very high Article Processing Charges (APC) for publishing open access ("Gold Open Access"). This concern is a misconception since open access is not only possible after paying these APCs. An alternative is "Green Open Access", which is about depositing a free version of the article next to the paywalled paper. Another alternative are so-called Diamond Journals, which are free for authors and readers. Charging high APCs is more a way for publishers to monetise and exploit the requirement for open access publications. However, this practice is not in line with the idea of Open Science. Check the report Open Access Diamond Journals Study for more information on Diamond Journals.

FAIR means that data is

Consequently, others can freely access, use, modify, and re-distribute the data, subject to acknowledgement.

Addition: FAIR data is not necessarily Open Data since FAIR data can meet the requirements while being accessible only to a small group of researchers (see blogpost).

Open educational resources (OER) are teaching, learning, and research materials released under an open license allowing free access, use, modification, and re-distribution. The realisation of OER plays a crucial role in the achievement of several of the Sustainable Development Goals (SDG), amongst others, Quality Education (SDG 4), Gender equality (SDG 5), and Peace, justice, and strong institutions (SFG 16). See UNESCO's Recommendation on Open Educational Resources for more details. Addition: See also our report on the Basic concepts, challenges, and business models of OER, as well as our guide on publishing OER in a FAIR way.

Software is open-source if the source code underlying the software is released under an open license in a human- and machine-readable format, allowing everyone to access, use, modify, and re-distribute it. This also requires a specification of the computational environment needed to execute the code and run the software. Addition: This aspect comprises the use of open-source software, for example, QGIS instead of ArcGIS, and the development of open-source software, such as the source code underlying a prototype or a computational analysis written in R or Python.

Open hardware means that the design specification of a physical object is openly available under an open license allowing everyone to study, modify, create, and distribute it. In the case of open hardware, physical objects should be maintained by communities using recyclable and sustainable resources. Addition: A further consideration is to use and develop hardware that can be created using locally available resources, particularly if a specific target community is addressed. For an open hardware example, check the project senseBox. 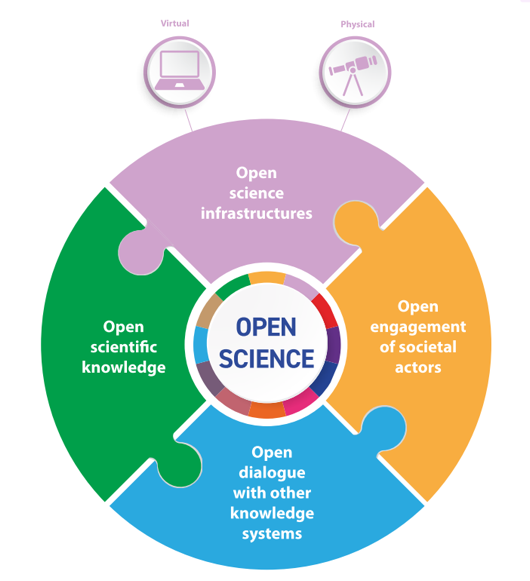 Open engagement of societal actors refers to getting out of the scientific bubble and paving the way for a dialogue between and collaborations with actors outside the scientific community, such as policymakers, entrepreneurs, and citizens. Considering practices such as citizen and participatory science, crowdfunding, crowdsourcing, and scientific volunteering during the research cycle makes research more inclusive and accessible to the broader society and more responsive to public needs. 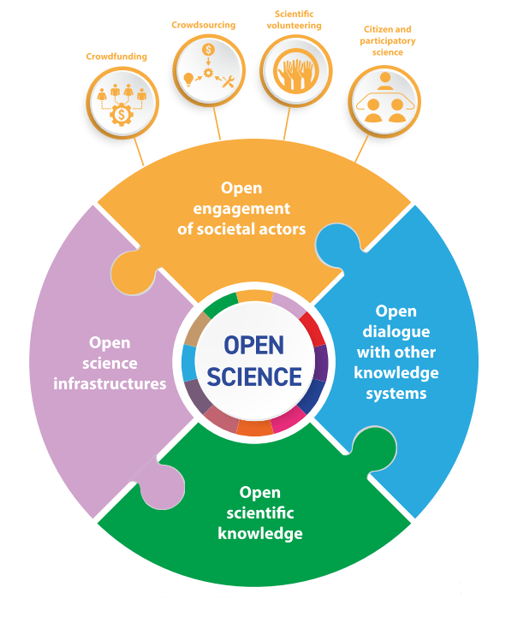 Open dialogue with other knowledge systems 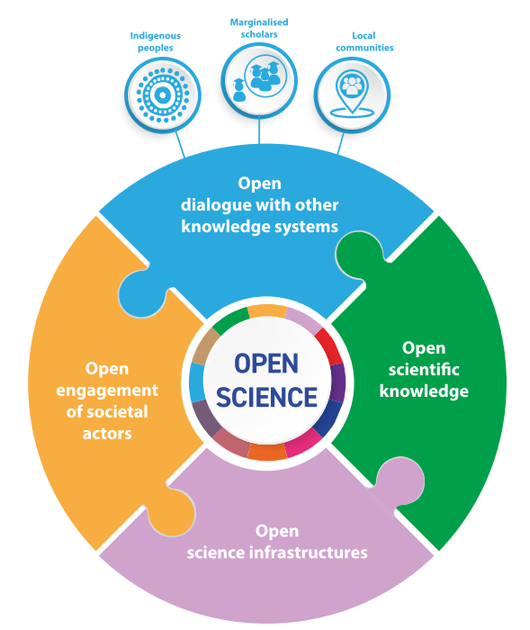 The figures and parts from the text come from: UNESCO Recommendation on Open Science © 2021 by UNESCO is licensed under Attribution-ShareAlike 4.0 International.