Five students from the faculties of ET and ITC achieved outstanding results at the Digital Twin Technology Hackathon that was held in Johannesburg last month. They won three prices for designing a digital twin prototype for waste collection (1st price), road asset management (2nd) and social safety (3rd). The jury highly appreciated their designs, and envisions the potential for future development of the generated ideas.

On November 7-11, the Embassy of the Kingdom of the Netherlands in South Africa and Wits University’s renowned digital incubator - Tshimologong Digital Innovation Precinct - co-organized a hackathon around the use of digital twins (https://tshimologong.joburg/digital-twin-technology-hackathon/). The departments of Urban and Regional Planning and Geo Information (ITC) and Civil Engineering and Management (ET) sent five M.Sc., EngD and PhD students to represent the University of Twente. Three academic staff members also joined the event to mentor all participants. 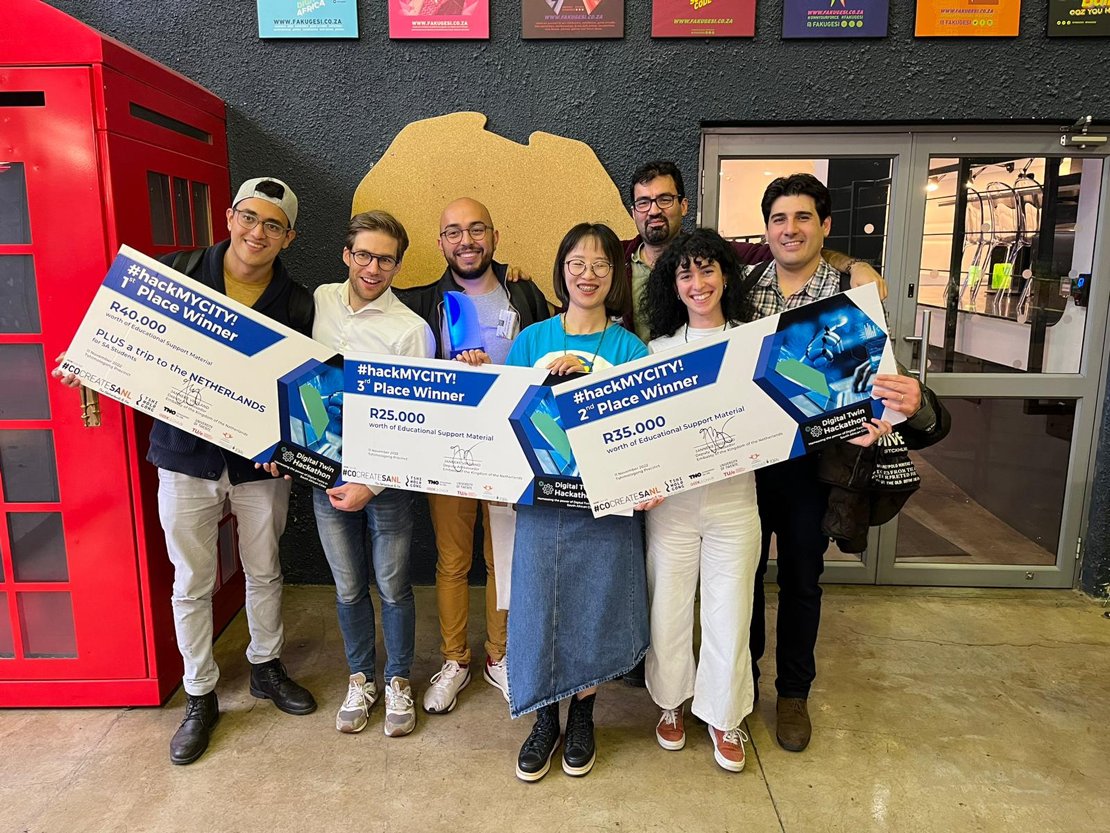 The event started with a day tour that showed participants how the city struggles with issues related to transportation, environment, asset management, and circularity. The participants then formed international groups with other students from the Technical University of Eindhoven, the University of Johannesburg, and the University of the Witwatersrand. In total, six groups collaborated in subsequent days to design a digital twin that tackles local issues of the city (related to trash on the streets, road poor conditions, and social insecurity).

All the participants from the University of Twente were members of all three winning groups bringing three prices back to Enschede.

Iván Cárdenas from ITC was a member of the first winning group that addressed the problem of waste management by designing a digital twin called Jo’trash. The digital twin uses VGI and Network analysis to identify the full containers and critical areas and improve the garbage collectors’ routing. The tool is composed of a web app for citizens’ information reports and a dashboard to visualize garbage containers’ current capacity, critical areas, and the best route to collect solid waste in the city. The winning team suggested that this tool can help the local administration improve their waste management, help reduce obstructed sewage and, hence, reduce the risk of floods. Apart from impressing the judges and winning the first prize, Jo'trash has received a fund to implement a pilot around the University of Pretoria.

Nima Zarrinpanjeh and Inga Maria Giorgadze, EngD Candidates from CME, were members of the second winning team. This team addressed the problem of the road network asset management proposing the use of a digital twin that prioritizes the maintenance needs of Johannesburg’s streets, using dynamic data of the network usage and road condition. Especially, it was proposed to mount cameras on public service vehicles like garbage collecting units to periodically scan the road surface and, with the use of photogrammetry technologies, extract and model the severity of the street’s damages. Apart from using this information for prioritizing the maintenance urgency, the team suggested using the time series data for predicting the street damage progress, which would enable a predictive maintenance approach for the road network.

This solution raised further interest by a judge, a representative of Royal Haskoning DHV in South Africa, offering further collaboration for potential adaptation of the proposed Digital Twin.

Rodrigoandrés Morales Ortega and Yue Ying from ITC, were members of the third winning team, who tackled the issue of criminality and safety on the streets by designing a digital twin that uses real-time data regarding the streetlight, the presence of informal traders, the crowdedness and the reported crimes to calculate the safest walkable route instead of solely the shortest path. The idea behind the tool called Shaping Power was to allow both citizens and urban planners to understand as well as locate unsafe streets in the city of Johannesburg. With this knowledge, both stakeholders can develop ideas to claim back streets and turn them into safe walkable areas. By using Shaping Power, pedestrians should be able to act proactively in unsafety situations through the ability to visualize data and take decisions on which routes to take for their daily activities. The safest and shortest routes for their destinations are presented to the users leaving out any unsafe options. Finally, the pedestrians can assess how safe they felt during a route, and their feedback can be used to retrofit the digital twin with real-time data.

Overall, the collaborative experience of participation at the Hackathon generated many creative ideas which, apart from Johannesburg, can be widely adopted. Despite the restricted duration of the Hackathon, the participants managed to combine their interdisciplinary backgrounds forming versatile groups and, with the valuable guidance of their mentors, developing and presenting concrete and impactful implementable solutions.

The success of the hackathon was widely identified, as the generated digital twins of all the teams exceeded the expectations of the organizers, and therefore discussions for further collaborations and development of the ideas have already emerged.

This participation in the Hackathon was endorsed by the ET and ITC Digital twin Geohub (https://www.utwente.nl/en/digital-society/research/themes/digital-twin-geohub/) initiative, wich aims to develop DT solutions that can address global challenges such as climate change, biodiversity loss, pandemics, and pollution.

The valuable experience would not be possible without the support of the Urban and Regional Planning and Geo-Information Management (PGM) and the Construction Management and Engineering (CME) departments. Additionally, the success of the participants and the three prices would not be possible without the insighgtfull guidance and help of their mentors Mila Koeva, Faridaddin Vahdatikhaki and Léon olde Scholtenhuis.