Fewer than 1% of people globally live in truly remote hinterlands, sharpening the need for better understanding of how urban forms impact food systems as well as social and economic development, according to ground-breaking new research by the Food and Agriculture Organization of the United Nations and the University of Twente.

Small cities and towns and the rural areas they influence, defined as their catchment areas, play an outsized role in the way people pursue their livelihoods, says the paper, which is titled "Global mapping of urban-rural catchment areas reveals unequal access to services," published today by the Proceedings of National Academy of Sciences. This is particularly the case in low-income countries where small cities and their catchment areas are home to almost two-thirds of their overall population.

Insights derived from the research "have strong policy implications, ranging from access to health services to the organization of city-region food systems and facilitating a mobility transition toward more commuting and less migration," say the authors, FAO Senior Economist Andrea Cattaneo, FAO Economist Theresa McMenomy and Professor Andy Nelson from the Faculty of Geo-Information Science and Earth Observation, University of Twente in the Netherlands.

By using multiple spatial datasets and calculating the time needed for rural populations to reach nearby keystone urban centres, they found that peri-urban areas are home to nearly 40% of the global population, equally distributed in the surrounding areas of small, intermediate and large cities. These results challenge the centrality of large cities in development narratives and plans. Peri-urban areas often fall through the cracks of policies designed for city residents and rural farmers, highlighting the need for greater coordination between urban and rural administrative authorities to help these in-between populations to leverage their proximity to towns and cities to access education, services and employment opportunities more efficiently.

The strikingly low figure cited at the outset describes people who live more than three hours—measured in terms of the available mode of transit from an urban settlement of 20 000 people or more. On a national level, the figure of the population in the hinterlands rises above 5% in only three countries with populations greater than 10 million: Madagascar, Niger and Zimbabwe.

"Rural and urban have been thought of as separate for too long. Development planning needs to focus on rural people's access to employment opportunities and services in nearby urban centres, and acknowledge that urban centres are not islands upon themselves," said Cattaneo. 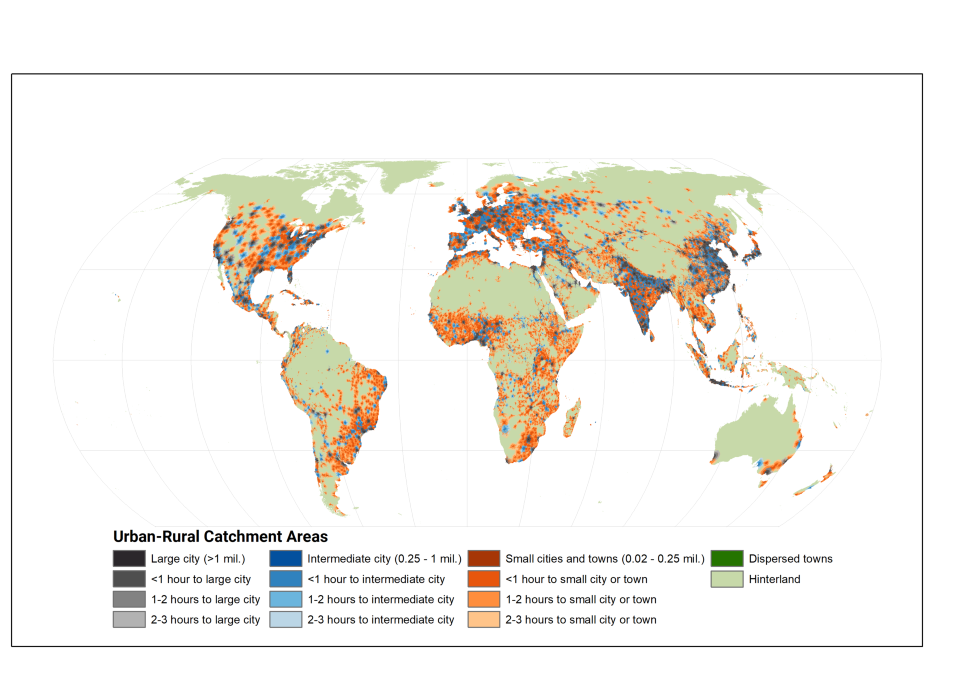 URCAs of the world. Credit: @FAO

What the map shows

The research refines previous planning paradigms by defining urban-rural catchment areas that express the interconnection between urban centres and surrounding rural areas with a gridded approach keyed to 1-kilometre pixels that facilitates comparisons across countries. The data set will be made available on FAO's Hand-in-Hand Geospatial Platform, providing a global public good for planners everywhere and a "consistent, exhaustive and multidimensional representation of the urban-rural continuum."

"Agri-food chains connect rural and urban areas," said Nelson, "Our data set supports both research and policy for transforming food systems to sustainably meet the increasing demands of urban markets." The findings highlight that the notion that higher-income countries are more urban is too simplistic. For example, more than half the rural populations in low-income countries live in high-density areas, six times more than is the case in high-income countries. That partly reflects a penchant for low-density suburban housing in affluent nations, as well as the way better road infrastructure, can make it easier to live further—in distance rather than time—from the centre of the local URCA.

More poignantly, the evidence shows that while large cities are now home to more than 40% of the world's urban population and nearly 50 percent for Latin America and the Caribbean, they draw proportionally fewer people into their functional orbit than smaller cities. The dominance of small cities and towns and their catchment areas in low per capita income countries highlights the need for policies aimed at improving off-farm employment opportunities, education and health services, as well as for local food systems and appropriate land-use strategies and transportation infrastructure investments.

The data provided can support a territorial perspective -already tested in high-income countries—that takes account of interlinkages between cities and their surrounding rural areas, leading to greater access to off-farm employment, a better-integrated local agri-food system, and less migration.

Prof. Dr. Andy Nelson is Full Professor at the Department of Natural Resources (NRS; Faculty of ITC). Together with researchers from the Food and Agriculture Organization (FAO) of the United Nation, he published a paper titled "Global mapping of urban–rural catchment areas reveals unequal access to services" in the journal Proceedings of the National Academy of Sciences (PNAS). The spatial data published with the paper is open access and can be found online.