Home ITCAlumniNews from AlumniJoint Education Programmes are Beneficial and Should Continue

As a high school student, Dr. Olajide Kufoniyi (Jide) was fond of mathematics and was good at it. But how does one transfer skills in understanding a world of abstractions into professional opportunities in the tough world called reality? One opts for a career in surveying − and that is precisely what Jide did. But he was also curious about new technologies and how they could aid the further development of his home country, Nigeria. This brought him to ITC, the Netherlands, for two long periods: first between October 1986 and April 1989 to pursue a PGD and an MSc in photogrammetry, next from January 1992 to May 1995 to conduct Ph.D. research. Jide revisited ITC fairly regularly after that − most recently to attend the seminar on “Capacity building in disaster geo-information management in developing countries”, which was held from 23 to 25 September 2009. We were curious to know how education at ITC had helped to shape his career. 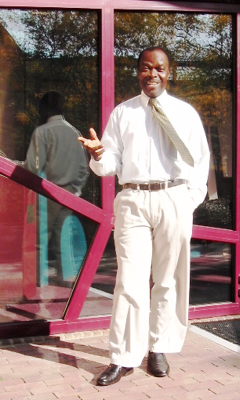 Starting with the first degree in geography and after a postgraduate diploma in surveying from the University of Lagos in January 1983, Jide (born 1954) went to work at the Federal Survey Department of Nigeria. His duties included the demarcation and survey of boundaries, including the Nigeria/Benin boundary and the boundaries of the newly created Federal Capital Territory (FCT Abuja). He became involved in photogrammetric mapping. The technology impressed him a great deal and triggered the desire to pursue further education abroad. As he says, “In 1986 I applied for an EU fellowship programme with, as preferences, University College London (UCL) for a one-year MSc programme and ITC for a 2.5-year PGD/MSc programme.” ITC was the first to grant admission and, when the arrangements had already been completed, he also received notice of UCL admission. “To stay outside my country for more than two years, yeah, that’s a long time, but I’ve never regretted my choice. The education at ITC was thorough, and the mix of education and training benefits. After having learned the concepts, I could practise them immediately − a perfect preparation for later professional activities.” After nine months into the course, Jide’s wife and newborn daughter joined him. His second child was born in Enschede.

With an MSc degree in photogrammetry (with distinction), Jide became head of the Department of Photogrammetry at the Federal School of Surveying, Oyo, Nigeria, in April 1989. He introduced computer programming into the curriculum and established the Computer Unit − achievements he is still proud of today. Developing photogrammetric adjustment and mapping software opened his eyes to geographical information systems (GIS). Again he thought, “The best way to enrich my knowledge is by going abroad.” ITC accepted his application. January 1992 he left his wife again and now three children – the third one being just five months old. “At ITC the research environment was fine, while the opportunities to attend conferences and present research results, together with the feedback I received, enabled me to accomplish a high-quality study.” In May 1995, Jide defended his PhD thesis Spatial Coincidence Modelling, Automated Database Updating and Data Consistency in Vector GIS at Wageningen Agricultural University (today Wageningen University). His promotor was Professor Martien Molenaar. “When doing my research, the time went by very quickly because I had to do many things,” Jide reflects. “But my family stayed in Nigeria, and for them time didn’t fly.” Fifteen years ago, the world was not the global village it is today. “To speak to my wife, I always had to go through a neighbour living some 2 km away. The family had a telephone. I would phone them, set a time, and my wife would go over there. Often I had to try for hours to get contact. Just telephone and letter, no e-mail, no skype. How times change!”

“To pursue my education at ITC has been my best decision ever,” says Jide. In 1998, he became chief executive of the school he left in 1992 to conduct Ph.D. research. He modernized the programmes from analog land surveying to fully digital surveying and geoinformatics, for example, by introducing a geoinformatics department and a postgraduate diploma in GIS. The inclusion of the school in the Education Trust Fund as a beneficiary at the same level as any Nigerian Polytechnic is another highlight of his service at the school. From 1 September 2000 to 31 August 2008, Jide served the maximum tenure of eight years as executive director of the Regional Centre for Training in Aerospace Survey (RECTAS), located on the Obafemi Awolowo University (OAU) campus, Ile-Ife, Osun State, Nigeria. Established in 1972 under the auspices of the UN Economic Commission for Africa, RECTAS is a joint initiative of African countries in the field of geoinformatics. At RECTAS, Jide introduced GIS and cartography specializations, and facilitated joint MSc courses in geoinformatics with ITC and joint Master/MSc courses in remote sensing and GIS with OAU. Are there sufficient students willing to pursue a study in geoinformatics? “Yes, there are,” replies Jide. “The challenge is not so much the number of students as their employment.” Graduates do not find good employment. Not because there are no vacancies but because of an embargo on new employment. Although institutions require fresh blood, they were not allowed to recruit new people. It is only recently that the embargo was lifted. If the utilities (electricity, communication lines) were better, graduates would be able to generate jobs themselves through self-employment. Unfortunately, to be able to run computers (which are relatively cheap) reliably, expensive generators and fuel must first be bought. For many, this is too big an investment and it creates a competitive disadvantage. Furthermore, today’s way of doing business requires access to reliable communication lines and these are lacking. Also, at RECTAS the supply of electricity may be interrupted for days, necessitating the use of electricity generators. “Buying fuel reduces the budget for improving training facilities. Staff are prevented from traveling abroad to renew their knowledge, and therefore foreign funding is extremely important.”

Should students from Africa go abroad for a high-quality academic education as Jide once did, or would they do better to stay in their home country now that the world has become a global village? An unambiguous answer, in terms of a simple yes or no cannot be given. Compared with 20 years ago, the level of academic education has risen tremendously in Africa. But even when education at the same level is available at home, this does not mean that an education abroad would be a waste. Why? “Studying in another environment brings cross-fertilization, feedback and knowledge exchange. It answers the question ‘Are we on the right track?’ So cross-border education is always good. However, the need for human resources trained in geoinformatics is so large that we cannot rely only on sending people abroad. In this respect, joint education programmes run in collaboration between North and South institutions, as ITC is doing with RECTAS, are beneficial and should continue.”

Jide is currently the secretary-general of the African Association of Remote Sensing of the Environment, and also the ISPRS regional representative for Africa.