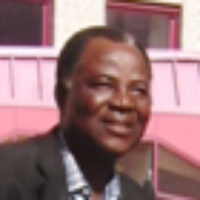 Dr Joseph Olusola Akinyede, born (1952) and living in Nigeria, is a very special man: he is ITC’s first PhD student ever. “ITC is one of the best educational institutions in the world,” he immediately replies to my question concerning his considerations on continuing education at ITC. “It was a great privilege. ITC is unique.”

Joseph got the opportunity to conduct research at ITC through a four-year scholarship granted by the European Economic Community (EEC) in 1986. A year earlier, an EEC scholarship had enabled him to follow a postgraduate course in applied geological survey − also at ITC. In February 1990, Joseph received a PhD degree for his thesis Highway Cost Modelling and Route Selection Using a Geotechnical Information System from the Delft University of Technology, the Netherlands. ”My PhD research equipped me with the skills to independently understand a problem and quickly define ways of solution,” says Joseph. “Let me give you a recent example. The Fulani people move their cattle from the north of Nigeria to the south in the dry season, and in the reverse direction when the rainy season comes. Their movements cause friction with the settled farmers. Who is causing the problem: the nomads or the farmers? To answer that question, I recommended mapping the Fulani track routes from satellite images captured over the last 20 years. Using GIS technology, changes over time can be identified and also the areas of infringement. The study has been approved and is ongoing.”

Having been awarded an MSc in geology with a specialisation in geochemical exploration by Ahmadu Bello University, Nigeria, in 1981, Joseph set about building a career as a research officer at the Nigerian Building and Road Research Institute in the first 10 years of his professional life. Here he discovered the possibilities of aerial photographs when it came to road construction. “I became convinced of the great value of extracting geo-information from images to support the development of backward regions in my country,” says Joseph, “and in the process discovered that I was keen to know more about the technology.” After having returned to Nigeria as a doctor in technical sciences, he moved from road construction to agricultural land development. Ten years later, in August 2001, he again made a switch, this time from land to space, by becoming director of space applications at the National Space Research and Development Agency (NASRDA). Educated and trained to understand and interpret the Earth beneath his feet, from now on most of Joseph’s career was devoted to space technology.

In many countries, a great deal of geodata is scattered across a diversity of institutions. This scatter represents a stumbling-block to greater use and better exploitation of geodata. Also, the government of Nigeria recognises the importance of sharing geodata, of easy access and of avoiding duplication. As a result, the establishment of a national spatial data infrastructure was placed high on the agenda. Joseph was heavily involved in producing the national geo-information policy for Nigeria. “It was our thinking that NASDRA should be the repository of all (high-resolution and other) satellite data acquired over Nigerian territory. Then, if any agency or institution applied to NASDRA to buy satellite images, we would know where they were archived and whether they were usable by the applicant. That would avoid duplication, as well as guarantee a standard level of quality. That was the intention we had in mind. Our recommendations resulted in government policy, whereby everyone who wants to use satellite imagery must go through NASDRA. However, it is one thing having a government policy, it is another thing getting that policy implemented. The issue of having a policy on the ground that never comes into effect is typical of many developing countries. Why people still prefer to skirt around NASRDA cannot be explained and is hard to understand. It is a waste of money, a great waste. It is only good for the image production companies, but very bad for the country.”

It seems that Joseph’s career takes a sharp turn every 10 years. First he was involved in roads, next in land development, and then he moved from land to space. April this year, he left NASRDA to make the transfer from space to education by becoming director of the African Regional Centre for Space Science and Technology Education in English Language. In Africa, there are two such centres affiliated to the UN Office for Outer Space Affairs: one for the English-speaking countries, established in Nigeria; and one for the French-speaking countries, established in Morocco. Other centres are found in Brazil, Mexico and India. “The Centre, inaugurated in November 1998, maintains an excellent working relationship with NASDRA, which is the supervising agency on behalf of the Nigerian government.” The Centre is sited on the campus of Obafemi Awolowo University, Ile-Ife, Osun State, the same campus where the Regional Centre for Training in Aerospace Survey (RECTAS) is sited. “This is not without reason: facilities and knowledge can be easily shared in this way.” The Centre runs nine-month postgraduate diploma courses, the best attended being the Remote Sensing & GIS course. Students come from a wide range of English-speaking countries in Africa. The UN provides the curriculum for implementing these capacity building projects. “I attended the 4th Meeting of the International Committee on Global Navigation Satellite Systems (GNSS) in St Petersburg from 14 to 18 September 2009, and there the addition of a GNSS course at the Centre within a year or two was discussed. ITC may very likely be one of the capacity building institutions that helps the UN to develop the GNSS curriculum.” One of the first things Joseph did, when he moved to the Centre, was to set up a committee tasked with reviewing the Centre’s achievements during its 10-year existence and making an inventory of the challenges. “I want to use this as a starting point for making the Centre ready for the coming 10 years.”

Would it still be beneficial − in terms of aiding to shape their career − for African students to leave their home country and obtain an academic education at ITC as Joseph once did? According to Joseph, it is in the interest of developing countries to have education institutions sited on their own ground so that decentralised education can be offered. However, “local education should be given in close cooperation with ITC, as the focal point of expertise, in order to benefit from advice on developing the curriculum and to train the trainers.” When looking over his shoulder at a career spanning 30 years, what feelings pop up? “I have had a fulfilled career,” says Joseph, “fulfilled in the sense that I have made a positive contribution to progress in space technology for my country and Sub-Saharan Africa as a whole − more than a Nigerian, I feel African.”