The department of Earth Systems Analysis of the Faculty ITC of the University of Twente is coordinating partner of the Geothermal Capacity Building Programme – Indonesia-Netherlands (GEOCAP). GEOCAP will develop intimately linked programmes for education and training, research and databases. To achieve the ambition of the Government of Indonesia to increase energy production and to support new geothermal working areas, geothermal companies will need earth scientists (geophysicist, geologists, geochemist) but also engineers, economists, land conservation experts and legal experts.

Indonesia depends strongly on fossil fuels for the generation of its energy. With a steadily growing economy and a fast-growing population it is anticipated that the energy consumption will also grow very fast. It is envisaged that Indonesia’s energy demand is planned to grow 30-fold in 2050. Although there is a large potential for alternative sources of energy, at the moment limited use is made of this potential. In 2006, the Government of Indonesia adopted the Fast-Track Programme designed to rapidly develop 10,000 MW of generation capacity utilizing the relatively inexpensive coal resources that is abundant in the country. The energy mix in 2010 consisted for almost 95 % of non-renewable energy. The downside is that it results in massive CO2 and dust emissions, which are hazardous to the people and environment and negatively contribute to climate change. Indonesia, however, is also committed to international agreements on greenhouse gas emission. The Indonesian Government aims to increase the share of sustainable energy to 15% in 2025 and 40% in 2050.

Indonesia is the country with one of the highest potentials for geothermal energy in the world. Geothermal energy is seen as one of the most promising sources of renewable energy for the future. Indonesia is located in ‘the ring of fire’ a large magmatic arc of active volcanoes. The country has among the world’s largest resources of geothermal energy or energy generated from natural heat produced by the Earth through volcanic processes. Geothermal plants do not produce hazardous gaseous emissions and the energy is renewable. However, most of the areas with high potential are located in protected forest areas and although geothermal energy offers a clean alternative for fossil fuels the conflict between exploitation and protection forms a major obstacle in the development of the geothermal potential.

GEOCAP specifically refers to the Indonesian-Netherlands capacity building programme that is seen as a contribution to the National Geothermal Capacity Building programme (NGCBP).The objective of GEOCAP is to increase the capacity of Indonesia’s ministries, local government agencies, public and private companies and knowledge institutions in developing, exploring and the utilization of geothermal energy sources. It also assesses and monitors its impact on the economy and environment. The programme envisages to outlive its duration as it strives to implement a number of joint degree MSc programmes with Dutch and Indonesian universities after the lifetime of the programme. The programme also serves as gateway for Dutch companies to liaise with the Indonesian geothermal sector to develop business to business case studies and corporation. The programme has a duration of 3.5 years. It is a public-private partnership with University of Twente, Delft University of Technology, University Utrecht, University of Indonesia, Technical University Bandung, University of Gadja Mada, knowledge institutions (TNO), companies (IF technology, DNV KEMA, WEP), industry Indonesian association for geothermics INAGA and WWF Indonesia. 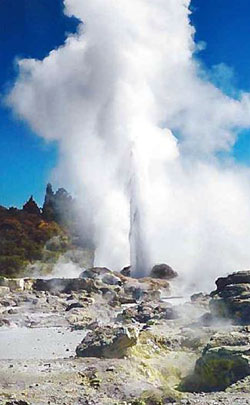