On the 14th and 15th of November 2013, the President of FIG, Mr. Teo CheeHai, visited several key organizations working on Land Administration in the Netherlands. The visit occurred subsequent to the Global Land Tool Network (GLTN) partner meeting conducted earlier in the week in The Hague.

The whirlwind tour included stops at the Head Office of Netherlands Kadaster in Apeldoorn, and the UNU School for Land Administration Studies, based in the ITC Faculty at the University of Twente in Enschede.

In Enschede, CheeHai met with the Dean of the ITC Faculty of Twente University - Prof. Tom Veldkamp along with Prof Zevenbergen, whose Chair is focused on Land Administration and Land management. The visit also included discussions with the staff and students of the United Nations University School for Land Administration Studies. Students were encouraged to be part of the solutions to address real world problems.  ITC Faculty of Twente University is an Academic Member of FIG.

Gratitude was expressed on behalf of FIG for the significant role the Netherlands has played in promoting innovative approaches to land administration, particularly in developing regions. Special recognition was made of the key role they played in developing and contributing to the Social Tenure Domain Model – now finding widespread use in many grassroots contexts. The Dutch association, Kadaster and ITC expressed their gratitude at FIG for enabling a progressive global forum in the domain of land administration – and to Teo himself, for being the most recent champion for a paradigm shift in land administration. 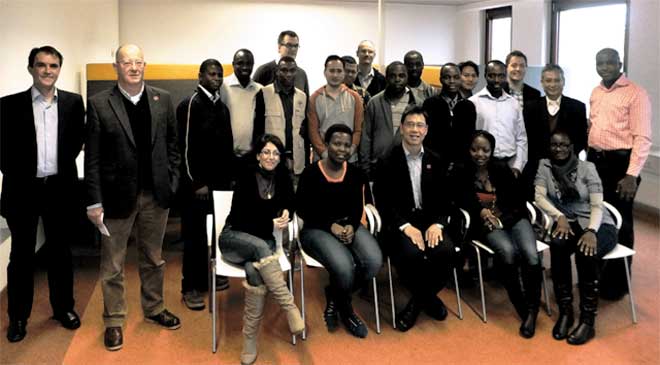