Dr Yijian Zeng became a PhD student at the ITC Faculty of the University of Twente, under a joint-cooperation project supported by ITC, CUGB (China University of Geosciences (Beijing)) and CAREERI (Cold and Arid Regions Environmental and Engineering Research Institute, China Academy of Sciences). His study focused on understanding coupled mechanism in soil, using field observations and numerical simulations. In 2007, with a control sand bunker experiment, he indicated how the thermal or isothermal soil moisture fluxes can alternatively dominate in soil on a daily scale. After that (2008), he designed and conducted a field experiment in the Badain Jaran Desert, located in the Northwestern China. With the detailed observation of micrometeorological and soil physical parameters, he assessed how much precipitation evaporated and how much was conserved in the sand, which could be used to evaluate the water sources for desert plants.

With the analysis of the experiments mentioned above, he realized that single-phase transport mechanism of the classic theory cannot explain the discrepancy between model estimates and field observations of the vapor fluxes in soil. To overcome this, he developed a two-phase heat and mass transport model to consider vapor transport with diffusion, advection and dispersion mechanisms (2009). The results show that the newly developed model outperforms the traditional theory in calculating surface evaporation with regard to the comparison with the field observations (2010). To further explain why the newly developed model is better than the traditional model, he conducted an insightful investigation on the driving forces in the two models and explained the difference between the two models mechanically (2010). Furthermore, in order to understand how a changing climate can affect patterns of evaporation at a regional scale, he combined the newly developed model with data assimilation technique to retrieve soil moisture and temperature profiles (2011). His research resulted in a Doctors degree Cum Laude. 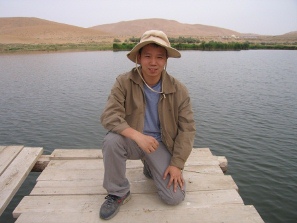