Former ITC rector Professor Martien Molenaar was decorated with Royal Honours as Officer in the Order of Orange - Nassau (Officier in de Orde van Oranje-Nassau). The decoration was awarded by the Mayor of Enschede, Peter den Oudsten, during the 59th Dies Natalis of ITC on 17 December 2009.

Professor Molenaar has been appointed to Officer by Her Majesty the Queen, for his contribution to the use of geo-information systems in the Netherlands and especially in less developed countries and emerging economies. Molenaar dedicated his royal decoration to the worldwide ITC community. 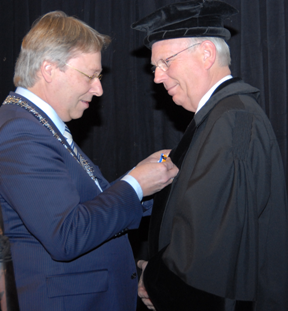