At a ceremony at the premises of VNU-University of Science the joint course was officially opened by Vietnam National University’s Vice Rector Prof. Dr. Sc. Nguyen Hoang Luong. Prof. Dr. Jaap Zevenbergen, Professor Land Administration Systems welcomed the students on behalf of the Faculty ITC of the University of Twente, while Dr. Pham Quang Tuan, Dean of the Faculty of Geography did likewise on behalf of VNU-US and Mr. Hoang Tuan Anh, as one of the students, on behalf of the ten students who started this course.

In attendance were also Dao Trung Chunh, vice-director of GDLA (the General Directorate of Land Administration), Prof. Dang Hung Vo, former vice-minister of MoNRE (Ministry of Natural Resources and Environment) and Head of the VNU-US department of Land Administration, Dr. Nguyen Tien Giang, Deputy Director of the post-graduate program, staff from the faculty and the students.

In his speech Prof. Zevenbergen stressed  the importance of land, the fact that land administration is a tool, and thanked all people who contributed so much to making this collaboration and course possible.

The joint course was developed in a project modality with the support of the Netherlands Government through the Vietnam Facility initiative of the Netherlands’ Ministry of Foreign Affairs. It is generally perceived as a successful project addressing the capacity needs in Vietnam. 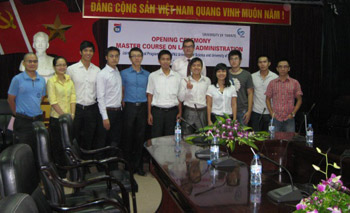