Siti Nurbaya Bakar obtained her master's degree at the Faculty of Geo-Information Science and Earth Observation (ITC) of the University of Twente in 1988. She was Secretary-General at the Ministry of Home Affairs in Indonesia and subsequently Secretary-General of the General House of Regional Representatives (DPD RI).

Siti Nurbaya Bakar was the first female Secretary-General of the DPD RI. She is seen as a rare player in Indonesian politics and an example to women in the entire country. She is averse to bureaucracy and opposes corruption. For that reason she refused earlier requests to join cabinets in 2000 and 2004. For example, at her appointment as Secretary-General she selected employees newly graduated from universities instead of reappointing old employees of ministries and government institutes.

Expectations for the new cabinet were running high. 'Jokowi', as the new president Joko Widodo is popularly called, wants to put a lot of effort into fighting corruption. The new president is not part of the elite in Indonesia. He is the son of a carpenter and used to be a furniture merchant himself before he went into politics. Jokowi became mayor and then governor of Jakarta. The 'Kerja' cabinet, or business cabinet, presented itself today with rolled-up sleeves as a symbol for the new course set by the president and his cabinet.

Victor van der Chijs, President of the Executive Board of the University of Twente, congratulates Siti Nurbaya Bakar with her appointment. "I view Siti's appointment as Minister of Environment and Forestry as a compliment for the ITC Faculty, which for decades has dedicated itself to training professionals in developing countries. During her speech at the opening of the academic year of ITC last month, Minister Ploumen already expressed her expectation that she would meet the new class of students again in the future, when they held an important position in their home country." 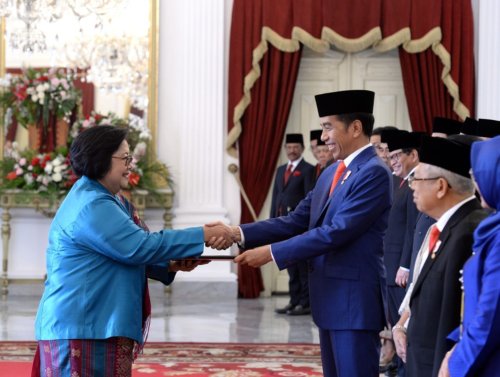