AARSE President Prof. J. Kufoniyi (ITC Alumnus as well) presented the AARSE Achievement award at the opening ceremony to Dr Woldai. As a founder and the first president of AARSE, he contributed substantially not only to the growth of the organization, but primarily, he facilitated the development of the use of remote sensing and GIS on the whole continent.

A further surprise came after the opening keynote speech of Dr Woldai:
ESRI decorated him with the "Making a Difference in Africa" award.

Dr Woldai, who was deeply touched, cut short his acceptance speech by saying: "Awards are given not for talking but for working". 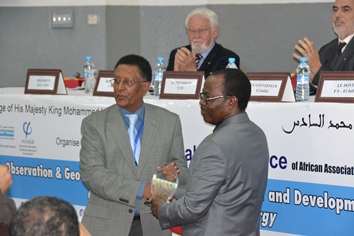